skip to main | skip to sidebar

The Morton Collecton - The Stamps of Weimar Germany 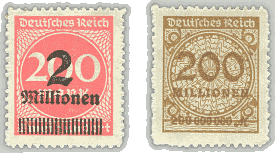 The Weimar Republic is the period in German history between the end of WWI and the coming to power of Hitler in 1933. Weimar society was characterised by great political instability, violence and strikes. There were eight elections in its short 15 year life span, and over 16 different political parties, including five different liberal parties, standing for parliament.

I came across an article the other day revealing that French president Sarkozy has become an avid stamp collector.  It seems that he's even the sponsor of a stamp club called the Elysée Philatelist Club named after France's presidential palace.

Who would be on your list of the top five? 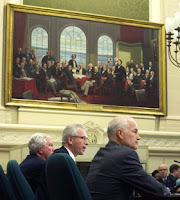 "Fathers of Confederation" was a large (8 X 13 feet) oil painting commissioned by the Canadian government in 1883. The painting featured the men involved in the creation of Canada in 1867 and was painted by the artist Robert Harris.

Many of Canada's most influential early citizens appear in the painting such as Sir John Macdonald and Thomas D'Arcy McGee - both of whom have been honored individually on Canadian postage stamps as well.

The painting has been reproduced on two different Canadian stamps, Scott #135: 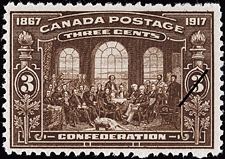 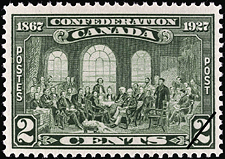 Both feature beautiful renditions of Harris' painting. However, if you look closely, you'll notice that eight people are missing in the Scott #135 version but they reappear in #142. Sadly, the original painting was destroyed by fire when the Canadian Parliament building burned in 1916. However, Toronto artist Rex Woods later produce a copy for the centennial celebration in 1967 which still exists today and is displayed in Charlottetown, Prince Edward Island - the location of the original conference commemorated by the painting.
Posted by Larry at 8:27 AM 0 comments

Canada Post CEO to be New Head of Royal Mail 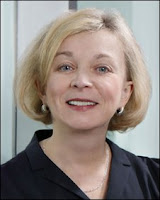 Moya Greene, CEO of Canada Post, will be the new head of Britain's Royal Mail it was announced yesterday.  Ms. Greene has led Canada Post since May, 2005.  During her tenure they have experienced five consecutive years of profitability - even in this era of declining use of traditional  mail services.

My Visit to the SDAG Spring 2010 Stamp Show

This past Saturday I was able to attend the Stamp Dealers Association of Georgia Spring stamp show.  I was joined by my 11 year old son for his first visit to a stamp show.  I love shows.  I buy a lot of stamps on line these days but there's nothing like sitting at a dealer's booth, looking through his stock real time, examining the items of interest and choosing what you need right there on the spot.  There were 15 dealers at this show offering items for every collecting area and budget.  I had my Classic Era Canada want list with me this time and was able to find several things that I both needed and could afford (not always an easy trick!).

From Tony Roozen of Stamps Unlimited I found some great Canada & Commonwealth sets at reasonable prices, among them these:

Tony was very helpful and he also maintains a full-service stamp store in downtown Atlanta.  I've not yet been there but plan to visit him in the near future.  I was also able to fill some holes in my Classic Canada used collection at Stamp-tique.  Glenn & Rowena Hanle were so nice and had an amazing selection of Canadian stamps that I greatly enjoyed looking through - though many were out of my league price-wise!

Besides filling some of those holes in your want list, another advantage of a show is the accumulated collecting knowledge at one's fingertips.  Take a few minutes and talk to the dealers - many of whom have decades of experience  stamp collecting.  I spent a very enjoyable 20 minutes talking to a gentleman named Roy Mooney.  Now in his 80's Roy spent many years documenting the thousands of FDC cancellations associated with the 7-1-71 transition from the old Post Office Department to the USPS.  These cancellations were done using a stamp issued for the occasion (Scott #1396) and a specially designed cache sent to all US post offices at the time: 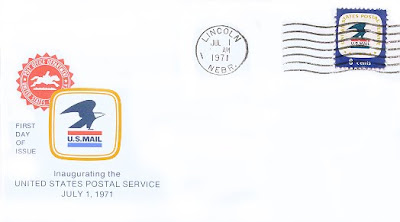 I'd never heard of this collecting area or this particular postal history event.  Only because I attended the show was I able to have my collecting knowledge expanded by Roy's patient and thorough explanation of this important event.

If you're interested in learning more about this, Roy has compiled his research into a book called "The 7-1-71 Affair" which lists all known post offices in the US issuing these FDC's and the corresponding value of an FDC from that office.  It can be purchased directly from Roy Mooney - just e-mail him at reejm@internetemc.net letting him know of your interest.

Despite the prominence of the internet among stamp collectors and dealers today, there's still a place for a good old-fashioned stamp show and I'm glad I am able to get to one occasionally.  Its an invaluable supplement to my mostly solitary collecting experience.
Posted by Larry at 10:23 AM 0 comments

For a short time from 1968 to 1970 there was an experimental printing done by BABN which included commemorative stamps Scott #482, 483, 484 & 490. During this time these stamps were issued with a perforation of 10. Most commemoratives of this era are perf. 12 stamps.

Below are three examples I've found of Scott #490, the "Curling" commemorative, showing  perforations on all four sides, straight edge on one side and straight edge at the top.

A collection of these stamps can be formed which includes an example of each possible configuration.  The stamps occur with not only with a single straight edge but with two straight edges as well.  The 2010 Unitrade Catalog explains the reason for this difference:

Therefore, for each stamp there exists a fully perforated example, four different single straight edge examples, one for each side, and the potential for examples with two straight edges one from each of these positions in the pane: UL, UR, LL, LR - depending on which side of the pane had selvedge.

If you have any experience collecting these BABN experimentals I'd love to hear from you!  Leave a comment and let me know how you've collected these.
Posted by Larry at 9:12 PM 0 comments

Share
May has been a busy month for Canada Post new issues.  On May 4, the issue commemorating the 100th Anniversary of the Canadian Navy was released.  Then, on May 13, the beautiful Marine Wildlife joint issue with Sweden.  Now, on May 22 five new designs featuring wildlife photography will be released. These are issued in honor of the 80th anniversaries of The Royal Canadian Geographical Society and Canadian Geographic. As with the previous issues, they will be available in booklet form: 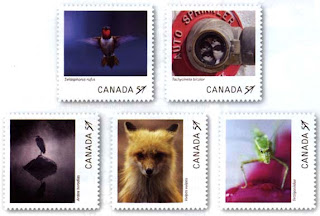 As well as as a souvenir sheet: 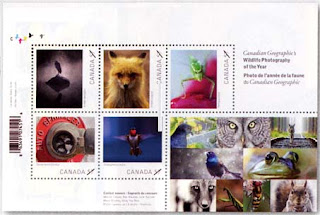 The images on the stamps are contest-winning photographs submitted by readers of Canadian Geographic.  In 2009, Canadian Geographic, in partnership with the Canadian Museum of Nature in Ottawa, invited Canadians to compete in five categories for their second Wildlife Photography of the Year contest. The winning pictures, chosen from more than 6,400 entries, were published in the magazine’s annual Wildlife issue; included in a traveling exhibition organized by the Museum of Nature; and featured on this set of five stamps.

To purchase these stamps for your collection, visit the Canada Post website.  Free shipping is available for customers in the United States.

The full news release on this issue with additional details, including the names of the winning photographers can be seen here.
Posted by Larry at 7:28 AM 0 comments

Visit My Store on BidStart

Sites of Interest to Collectors of Canadian Stamps

Promote Your Page Too